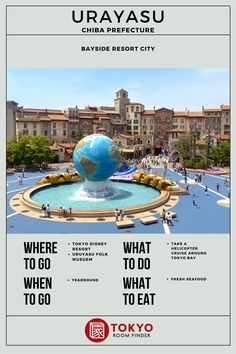 Urayasu - 浦安 - Urayasu faces Tokyo Bay and its most popular attraction is no doubt Tokyo Disney Resort. It was formerly a fisherman’s town, and many of the buildings dating back to this era have been relocated to Urayasu Folk Museum. Urayasu borders Tokyo’s Edogawa City and offers convenient access to the sights of Tokyo as well as within Chiba Prefecture. 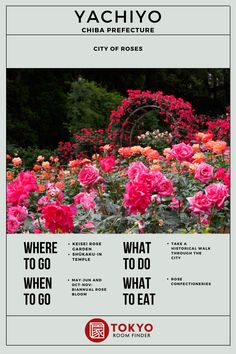 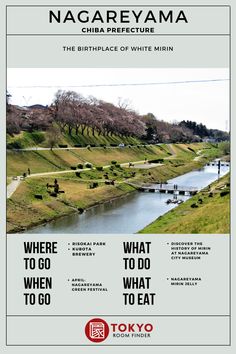 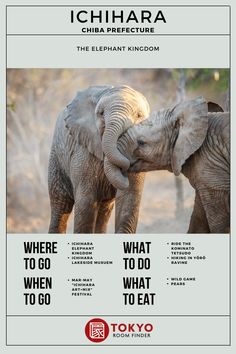 Ichihara - 市原 - Ishihara City is the largest city in Chiba Prefecture (by area) and faces Tokyo Bay. This coastal city is known for Ishihara Elephant Kingdom, home of the largest number of Asian elephants in Japan and 70 species of animals. Take a scenic ride through the valleys and hills of Ishihara on the Kominato Tetsudo Line, a diesel operated railway that still uses cars manufactured between 1961 and 1977. 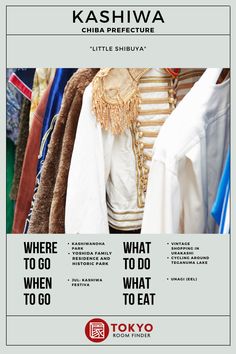 Kashiwa - 柏 - Kashiwa is located in the northwest of Chiba and faces Ibaraki Prefecture opposite the Tone River. “Kashiwa” means “oak tree” in Japanese and the city’s symbol is the oak tree. It is affectionately called “Little Shibuya” because of its shopping options, including an assortment of vintage stores in the district of Urakashi (Kashiwa backstreets). 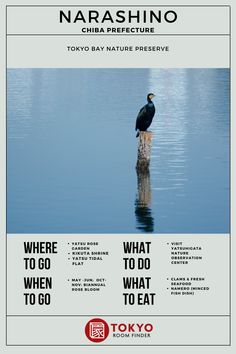 Narashino - 習志野 - Narashino City sits on Tokyo Bay and was built on reclaimed land. TheYatsu Tidal Flats are protected wetlands for migratory birds and one of the last tidal flats that survived urbanization in Tokyo Bay. 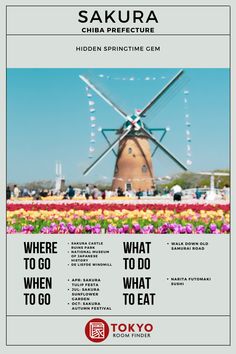 Sakura - 佐倉 - Sakura is a landlocked city in Chiba Prefecture 15 km away from Narita International Airport. The city’s seal and flag features the cherry blossom; however, Sakura City is known for its picturesque fields of tulips, lavender and sunflowers. Historically, Sakura was the largest castle town in the Chiba region under Tokugawa rule and a trip down Old Samurai Road is a great place to experience Edo period Japan. 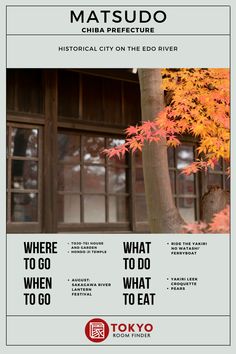 Matsudo - 松戸 - Matsudo City sits on the Edo River, opposite Tokyo Prefecture and it's just 20 minutes away from Tokyo Station via the JR Joban Line. Nearly half a million people live in Matsudo and it serves as a bedroom town to Tokyo and major cities in Chiba. 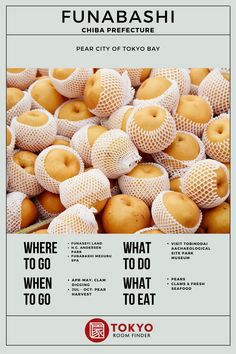 Funabashi - 船橋 - Funabashi City is widely known throughout Japan due to its peculiar, energetic unofficial mascot, Funassyi, an anthropomorphic nashi pear. Nashi pears, incidentally, are widely grown in Funabashi City. Along with pears, Funabashi is home to Funabashi Sanbanze Seaside Park a popular site for clam digging and other seasonal outdoor activities. 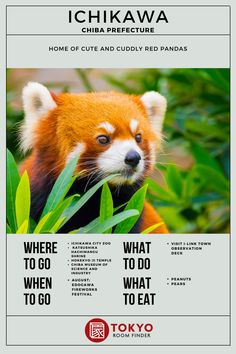 Ichikawa - 市川 - Ichikawa City is known for its red pandas at Ichikawa City Zoo. The city is also known for its bountiful pear harvests. Each year, Ichikawa co-hosts the Edogawa Fireworks Festival with Edogawa City in Tokyo Prefecture, which is held on both sides of the Edo River. It is one of the oldest and one of the top 5 largest fireworks displays in Tokyo. 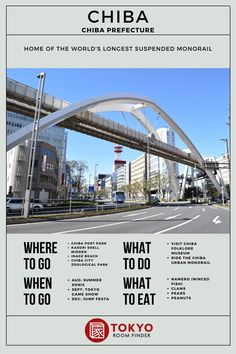 Chiba - 千葉 - As the largest city in Chiba Prefecture, Chiba City is home to 1 million residents. It’s the seat of the prefectural government office and city hall, as well as the waterfront business district, Makuhari. To get around Chiba City, hop on the Chiba Urban Monorail, the world’s longest suspended monorail (15.2 km long). 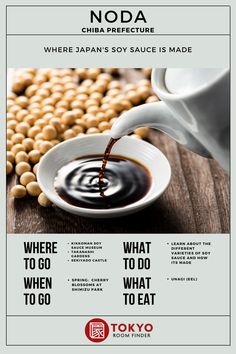 Noda - 野田 - Noda is the northernmost city in Chiba Prefecture and rests between Saitama Prefecture and Ibaraki Prefecture. A visit to Noda City will allow you to understand the importance of one of the key ingredients in Japanese cuisine, soy sauce. Here you’ll find the headquarters of Kikkoman, the leading manufacturer of soy sauce. 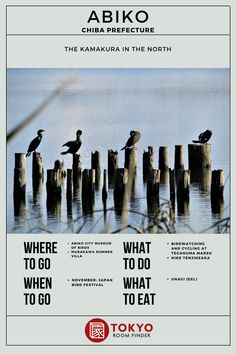 Abiko - 我孫子－Abiko is in the northwestern part of Chiba and sits across from Toride City, Ibaraki Prefecture opposite the Tone River. It is frequently referred to as the "Kamakura in the north" as it was a popular retreat for writers in the early to mid 20th century. Nature lovers will enjoy cycling and birdwatching at Teganuma Marsh, the site of the annual Japan Bird Festival. 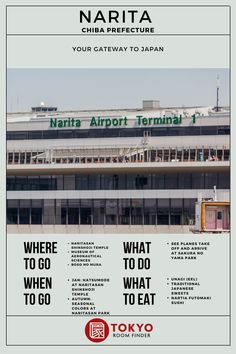 Narita - 成田- Narita is the entry point for many visitors to Japan as Narita International Airport handles a large volume of international flights. However, stick around after landing and you’ll see that there’s far more to Narita! For starters, check out Boso no Mura, an interactive living museum that’s a recreation of an Edo style village. Narita City is also where you’ll find Naritasan Shinshoji Temple, where millions go to celebrate the new year. 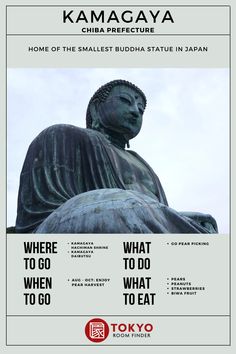 Kamagaya - 鎌ヶ谷 - Kamagaya City is located in the northwestern corner of Chiba Prefecture. It is known for its harvest of Japanese pears, or nashi, which have been cultivated in Kamagaya since the mid 19th century. The Kamagaya Daibutsu, located near Kamagaya Hachiman Shrine, is the smallest Buddha statue in Japan. 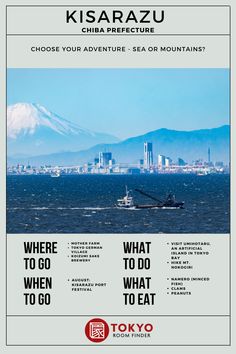 Kisarazu - 木更津 - Kisarazu City is located on Chiba’s Boso Peninsula facing Tokyo Bay. It is a prime relaxation spot known for its golf courses and outdoor attractions like Mother Farm and Tokyo German Village. Outside of Kisarazu is Mt. Nokogiri with its “portal” into hell and the largest stone-carved Buddha statue in Japan. The Tokyo Bay Aqua-Line is an underwater tunnel that goes across Tokyo Bay and connects Kisarazu with Kawasaki and Yokohama in Kanagawa Prefecture.